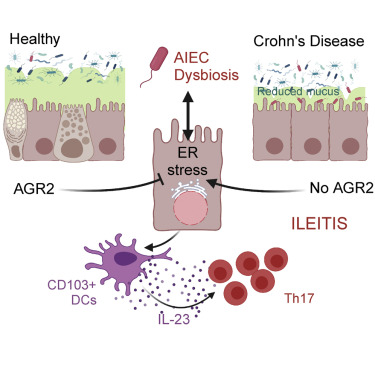 Endoplasmic reticulum (ER) stress is associated with Crohn’s disease (CD), but its impact on host-microbe interaction in disease pathogenesis is not w…

I wish on the bottom of each research paper there is a section after "Conclusion" that says "This is what you can do" then list actionable items. Knowledge is power but can be more powerful in our case if there is something we can do or ask our doctor to do for us so that all these research can be applied and converted into real, meaningful health currency.

For most scientific/medical research papers it would be way too soon and hence irresponsible for the authors to give specific actionable advice, especially for the upfront/basic science stuff. New therapies or new recommendations on diet or other actions are built up over multiple studies, often taking years or even decades to develop enough data to come to firm conclusions. This is true not only for IBD but for all of science.

The big breakthroughs that turn world upside and change what everyone thinks and does are few and far between. Patient, sustained effort that moves toward the goal is far more often the more successful approach. As the Emperor Hadrian said about rebuilding Rome after a fire: "Brick by brick my fellow citizens, brick by brick."
You must log in or register to reply here.
Top