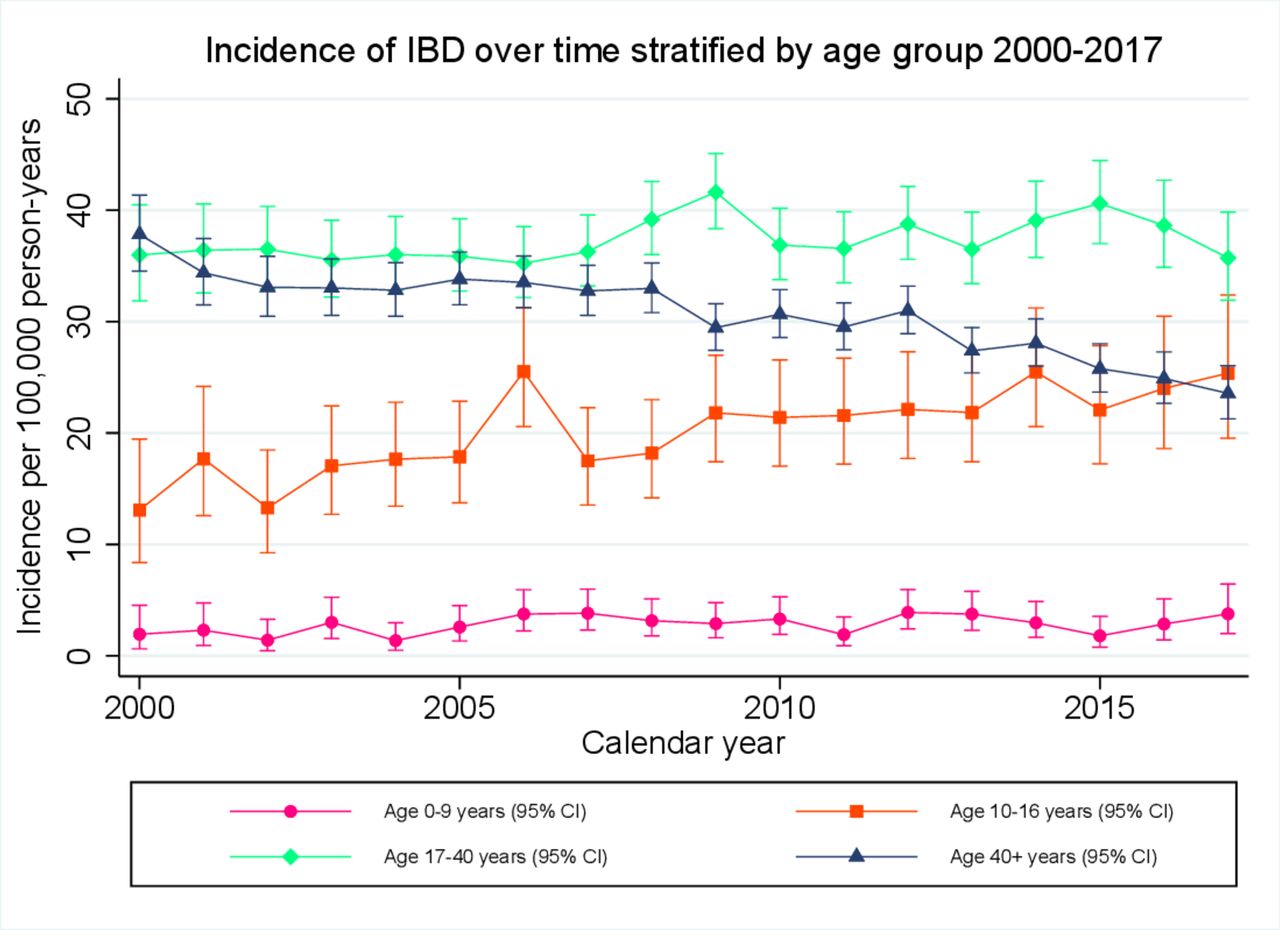 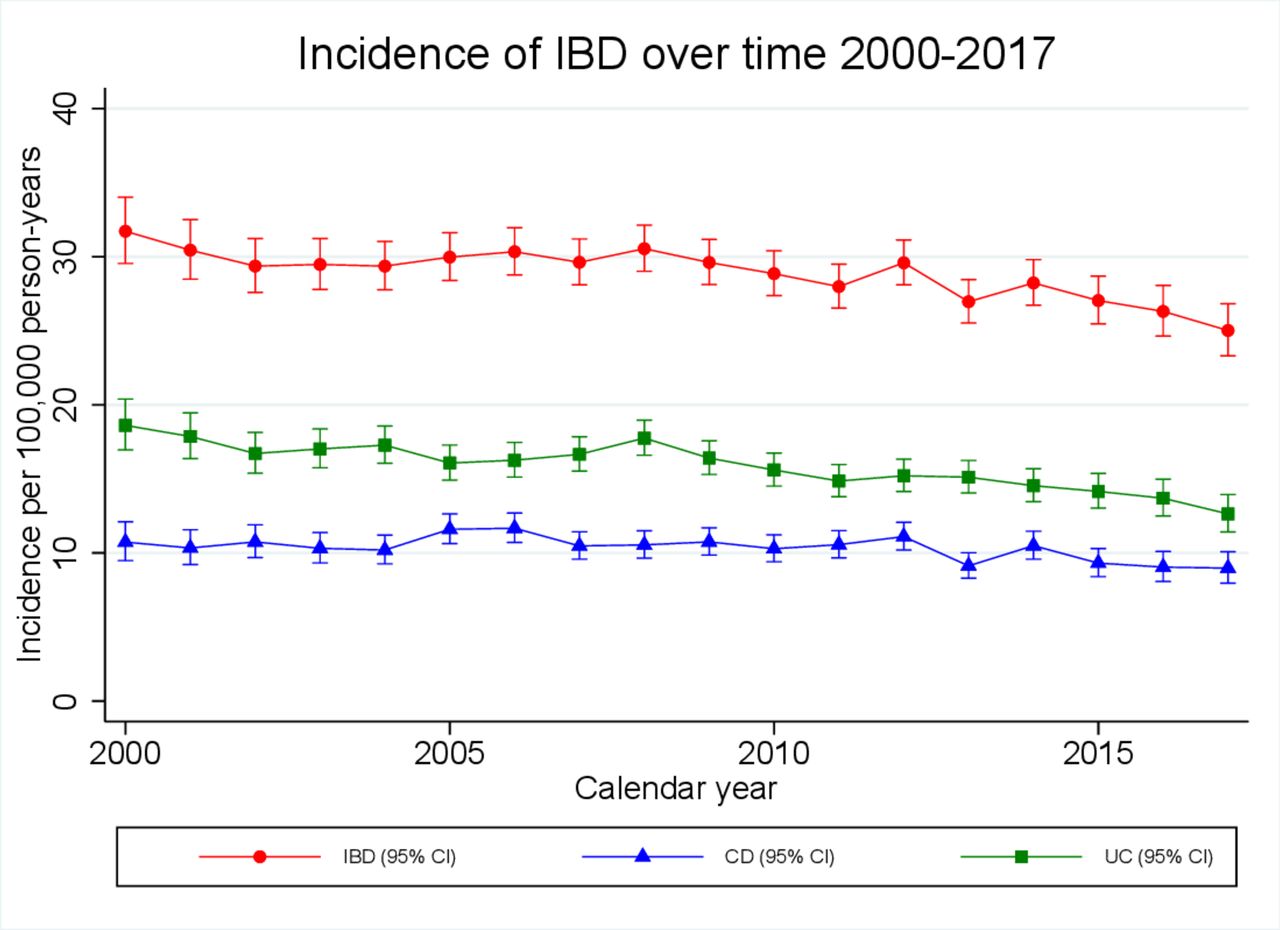 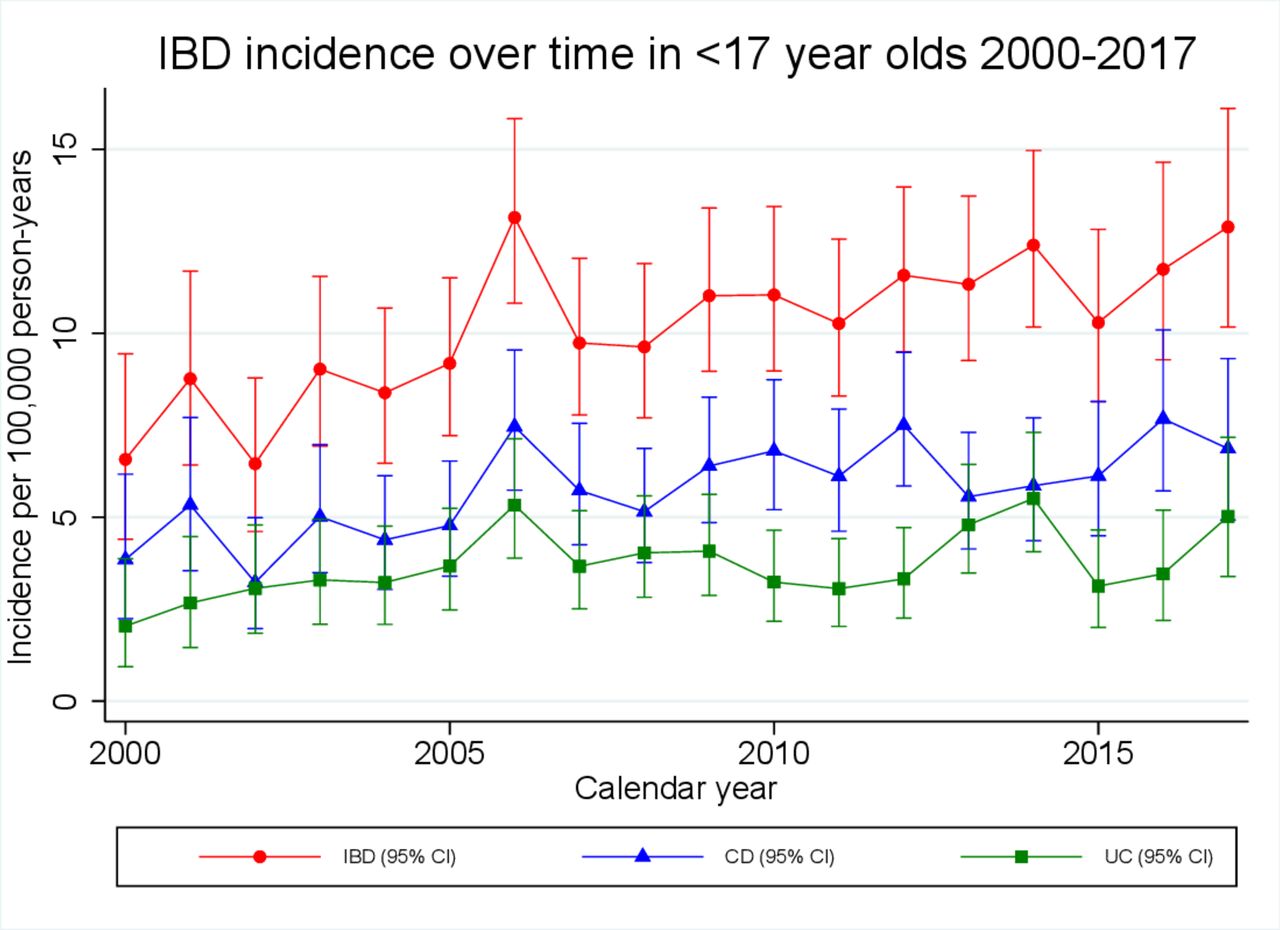 This is one of the largest observational studies undertaken to investigate trends in IBD epidemiology. Although incidence of IBD remained relatively stable for those aged 17–40 years and those aged 0–9 years, we observed a 38% fall in incidence for those aged over 40 years and a 94% rise in incidence in the adolescent population. The most recent incidence estimates are in line with some of the highest reported rates of paediatric IBD internationally.25–27

Study strengths include the large sample size and the prospective collection of healthcare records representative of ‘real-life’ clinical practice. Unlike previous incidence/prevalence studies that have relied on external data sources to estimate denominator population characteristics, we were able to extract demographics and person-time follow-up for all individuals in our cohort, including those who did not develop IBD. Additionally, IMRD has been shown to be broadly representative of the UK in terms of age, sex, mortality rates and prevalence of numerous comorbidities,15 allowing us to draw inferences from our data and relate this to the UK population as a whole. Not only has the diagnosis of IBD been validated in a similar GP database,12 but we have demonstrated that the majority of individuals coded for IBD in IMRD have been prescribed drugs commonly used to treat IBD and presented with symptoms in keeping with IBD. This would support the argument that IMRD represents an important and useful resource for further epidemiological studies of IBD.

Limitations arise when conducting GP database research, particularly as the primary use of the software that contributes to IMRD is for patient management purposes rather than medical research. Thus, data can be incomplete and will often only reflect those events that are deemed to be relevant to the patient’s care. Given that we were also reasonably strict with our case definition, this may have resulted in underascertainment of cases. Although we find reason to be confident in the validity of the data, we were not able to confirm our cases by evidence of radiological, endoscopic or histological findings. Therefore, it is possible that some individuals were misclassified. There was a small risk of duplication of medical records. This could occur if a patient deregistered with one practice contributing to IMRD then subsequently registered with another IMRD practice during the observation period. This is likely to be the case for a very small number of individuals as IMRD only covered 5%–6% of UK GP during the study period. Although the total number of individuals contributing may be a slight overestimate, this would have no effect on incidence or prevalence rates. This is for two reasons: (1) duplicated records would cover different time periods during the study without overlap; (2) we took steps to ensure that prevalent cases of IBD newly transferring to practices were not counted as incident cases18 Therefore, incident cases were not counted twice.
Click to expand...

Conclusion
Although we observed a stable or falling incidence of IBD in adults over an 18-year period, our results are consistent with some of the highest reported global incidence and prevalence rates for IBD, with a 94% rise in incidence in adolescents. These findings are concerning and suggest that detailed prospective studies are required to understand the aetiological drivers.
Click to expand...