A 'smart toilet' in development uses artificial intelligence (AI) to scan stool for consistency and presence of blood — and early evidence suggests it is more accurate than patient self-reporting, a study reveals.

The remote, automated, real-time analysis and reporting increase the likelihood of physicians detecting gastrointestinal (GI) issues earlier, investigators report.
In a proof-of-concept study, the smart toilet was 85% accurate in categorizing stool consistency as loose, normal, or constipated. The findings were presented at the Digestive Disease Week (DDW) 2021 virtual meeting.
"This study highlights a very innovative and practical tool that could have major implications for patients and clinicians alike," Andrea Shin, MD, who was not affiliated with the research, told Medscape Medical News.


"Stool form or consistency and signs of bleeding are some of the most important pieces of clinical history when it comes to GI or bowel symptoms," added Shin, assistant professor of medicine in the Department of Gastroenterology & Hepatology at Indiana University School of Medicine in Indianapolis.
Image Analysis
The researchers tested their AI algorithm on 3328 images. They assessed photos from the internet and some submitted anonymously by participants in the study. 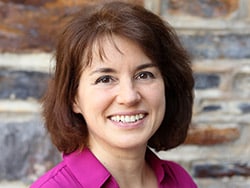 Dr Sonia Grego
"It's objective and more accurate," study author Sonia Grego, PhD, told Medscape Medical News. In contrast to asking patients to keep a bowel movement diary or recall the frequency and consistency of their stool over time, "the system does it for you," she added.
"Our technology — by automating the image acquisition — removes the burden of having to track your pattern for weeks or months," added Grego, founding director of the Duke Smart Toilet Lab at Duke University in Durham, North Carolina.

Information provided by patients "can have a big impact on decision-making," Shin said. "For example, if I am talking to an individual who suffers from irritable bowel syndrome (IBS), I commonly ask them about how loose or watery and hard or formed their stool is, because this information gives me clues as to the underlying problems that may be driving their symptoms."

Shin agreed it can be challenging for people to know what is important to report to their doctor. "This tool has the potential to relieve patient burden and facilitate communication between a patient and their clinician. It's a great example of how technology can be leveraged to enhance care."

Working Behind the Scenes
Together with gastroenterologist Deborah Anne Fisher, MD, an associate professor of medicine at Duke, Grego and colleagues devised a prototype that positions the image analyzer in the pipes behind the toilet. So the analysis is done post-flush.

"We are experts of toilets and toilet technology," Grego said. "We have learned that people really don't like to see anything weird around the toilet bowl."

The smart toilet system is designed for multiple users in a residential or commercial setting. The technology could be used in hospitals or long-term care facilities, for example. A fingerprint scanner on the flush mechanism tracks each individual user.

Mixed Reactions
Grego gets a range of reactions when she tells people she is developing smart toilet technology.

"Friends and family laugh about the concept of the smart toilet," she said, "so all the possible jokes that have been done on poops, we know."

In fact, the researchers also are collecting the jokes they hear. "We're being very systematic."

In contrast, gastroenterologists who learn of the technology in development are more enthusiastic, Grego said. "There is such a need for removing the uncertainty of the patient recall about bowel movement frequency and appearance.

"We are seeking to expand through collaboration with additional GI doctors. We want to develop a more advanced prototype and do further validation studies," Grego said.

Digital Health Tool
There is an aversion among patients to handling stool "or even talking about it," Grego said. Colleagues tell her that people are more willing to provide a blood sample, which requires a needle, than a stool sample.

"But a lot of health data is there [in the stool]," she added. "We think this will empower a lot of research as well as consumer data gathering."

For example, Grego envisions pharmaceutical companies using the technology to detect or monitor any changes in stool or gut health based on a treatment in development during clinical trials.

Furthermore, the technology might empower health-conscious consumers who want to track their own gut health. "This technology will be a whole new entry in the digital health toolkit," Grego said.

Although not included in the research presented at this year's DDW, the developers plan to add a sampling capability. Biochemic analysis of stool samples could provide "metabolically relevant information," including stool biomarkers and microbiome composition.

"We have demonstrated it in the laboratory. It will be part of the technology when developed into a product," Grego said.

This proof-of-concept study "is the first step in a path we are aggressively pursuing," Grego said. She estimated it will take about 12 to 18 months to develop a prototype for use with patients. "We hope to move to a product soon after that."

"I'm looking forward to seeing future iterations of this tool," Shin said. "It could have a role in monitoring important GI diseases and disorders, including IBS and inflammatory bowel disease, or even for the detection of 'alarm symptoms' that shouldn't be ignored."

"I could even see it having a role in preventative health in the future," Shin added.

The technology has been licensed to the spinoff company Coprata to develop the product further.

"We hope to have an impact on people's health very soon," Grego said.

My daughter says she's going to put one on her Christmas list!

These would also be good for us older adults which could find the early warnings of colon cancer or other changes.
C

"and early evidence suggests it is more accurate than patient self-reporting, a study reveals."

It definitely is more accurate than O's self reporting

I want one! And I want one installed in her apartment at college and I want it to have a reporting feature where me and the GI get results....a girl can dream can't she.

Staff member
I mean, while we're dreaming, an automatic, instant Fecal Calprotectin reading would be nice !
You must log in or register to reply here.
Top