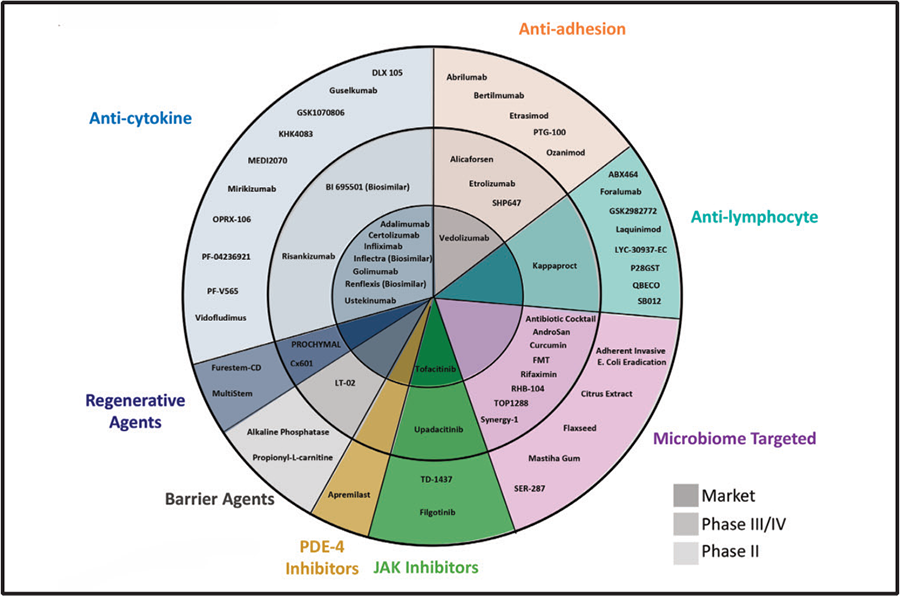 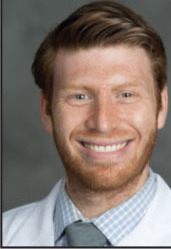 The availability of several biologic drugs for the treatment of IBD offers the possibility to combine these agents and simultaneously antagonise different pathways, potentially resulting in an additive or synergistic effects for refractory disease.

Combination treatment with a TNF antagonist and vedolizumab [anti-integrin] is particularly attractive because it includes a rapidly acting systemic agent and a slower acting gut-specific therapy. The first case reports and case series suggest that this combination has an acceptable safety profile and could be particularly useful in patients treated with TNF antagonists who have insufficient intestinal disease control but well-controlled extra-intestinal manifestations.94,95 One ongoing RCT is currently investigating the potential effect of triple therapy with vedolizumab, adalimumab, and oral MTX on endoscopic remission in newly-diagnosed CD patients at high risk for complications [NCT02764762].

We are aware of one small case series on the combination of a TNF antagonist and ustekinumab [three subcutaneous injections: 90 mg, 45 mg, and 45 mg, respectively] for paradoxical psoriasis resistant to topical therapy and MTX in patients with IBD in remission.96 The combination therapy, although not effective on the cutaneous lesions, did not result in short-term AEs and was well tolerated. Expanding Therapeutic Armamentarium for Inflammatory Bowel Disease: How to Choose the Right Drug[s] for Our Patients?

This is very interesting thanks for posting

Review
Digestion
. 2020 Jun 22;1-14.
doi: 10.1159/000507782. Online ahead of print.
Emerging Treatment Options in Inflammatory Bowel Disease: Janus Kinases, Stem Cells, and More
Benjamin Misselwitz 1, Pascal Juillerat 2, Michael Christian Sulz 3, Britta Siegmund 4, Stephan Brand 3, Swiss IBDnet, an official working group of the Swiss Society of Gastroenterology
Affiliations expand
Abstract
Background: Treatment of inflammatory bowel diseases (IBD) has tremendously improved during the last 20 years; however, a substantial fraction of patients does not respond to available therapies or lose response, and new strategies are needed.
Summary: Two pharmacological principles have been successfully used for IBD treatment: inhibition of cellular signaling and interference with leukocyte trafficking. Besides tumor necrosis factor, interleukin (IL)-23 is a promising drug target, and antibodies for the combined inhibition of IL-23 and IL-12 (ustekinumab and briakinumab) or selective IL-23 inhibition (brazikumab, risankizumab, and mirikizumab) seem to be effective in Crohn's disease (CD) with emerging evidence also for ulcerative colitis (UC). Janus kinase (JAK) mediates intracellular signaling of a large number of cytokines. Tofacitinib is the first JAK inhibitor approved for UC, and the JAK inhibitors filgotinib and upadacitinib showed potential in CD. Leukocyte trafficking can be inhibited by interference with lymphocyte integrin-α4β7 or endothelial MadCAM-1. The α4β7 integrin inhibitor vedolizumab is an established treatment in IBD, and long-term data of pivotal studies are now available. Additional molecules with therapeutic potential are α4β7-specific abrilumab, β7-specific etrolizumab, and the α4-specific small molecule AJM300. PF-00547659, an antibody against endothelial MadCAM-1, also showed therapeutic potential in UC. Modulation of sphingosine-1-phosphate receptor (S1PR) activity is necessary for the egress of lymphocytes into the circulation, and S1PR modulation results in lymphocyte trapping in lymphatic organs. Ozanimod, an S1PR1 and S1PR5 inhibitor, has been successfully tested in initial studies in UC. Mesenchymal stem cell therapy has been approved for the treatment of complex, active CD fistula, and mesenchymal stem cell therapy might be a paradigm shift for this condition. Autologous stem cell transplantation (ASCT) has been successfully used in CD case series; however, in a randomized trial, a highly stringent endpoint was not met. However, considering positive effects in secondary endpoints, ASCT might be a future treatment of last resort in severe, refractory CD cases, provided that safer protocols can be provided. Key messages: New IBD treatments are successful for a significant fraction of patients. However, new strategies for patient selection, treatment combinations, and/or additional therapies must be developed to serve the need of all IBD patients.
Keywords: Biologicals; Crohn’s disease; Inflammatory bowel diseases; Janus kinase inhibition; Lymphocyte trafficking; Small molecules; Stem cell transplantation; Ulcerative colitis.
© 2020 S. Karger AG, Basel.

Two pharmacological principles have been successfully used for IBD treatment: inhibition of cellular signaling and interference with leukocyte trafficking. Besides tumor necrosis factor, interleukin (IL)-23 is a promising drug target, and antibodies for the combined inhibition of IL-23 and IL-12...

Cell-Based Therapies
Autologous Stem Cell Transplantation
Since almost 30 years, small case series reported success of autologous stem cell transplantation (ASCT) for CD [96]. Approximately 70% of patients achieved remission or disease activity could be controlled with standard therapy for CD [97, 98]. ASCT has subsequently been tested in the ASTIC trial, in which stem cells were mobilized in all patients with immediate transplantation in one arm and delayed ASCT after ≥1 year in the control group [99]. ASTIC recruited patients with severe CD despite ≥3 therapies including steroids, not amendable to surgery. ASTIC further used a highly stringent composite end point of clinical remission (Crohn’s disease activity index < 150 for ≥3 months) 1 year after ASCT without steroids, immunosuppressants or biologics, and no radiologic or endoscopic evidence of disease activity. The study was negative since the primary end point was met by only 2 out of 23 patients in the treatment group versus 1 out of 22 controls. However, some benefits were suggested regarding secondary end points. Furthermore, long-term data from both treatment arms of this trial showed improvements regarding quality of life and endoscopic activity [100]. Severe side effects, mainly infections, were frequent after therapy, and 1 patient in the ASTIC trial died of sinusoidal obstruction syndrome.
Expert Opinion
ASCT is a relevant treatment option for the most severe CD cases, refractory to all treatments. However, this option should be reserved for highly experienced centers. Development of safer treatment protocols remains the most important challenge.
Allogeneic Stem Cell Transplantation
Allogeneic stem cell transplantation is an established treatment option for childhood IBD (very early-onset IBD) with most patients suffering from inherited mutations in signaling pathways including IL-10R1 and IL-10R2 [101, 102]. However, even though potentially effective, due to high risks, allogeneic transplantation is rarely considered in adult IBD.
Mesenchymal Stroma Cell Therapy
Treatment with MSCs might be a paradigm shift in the treatment of fistulizing CD. MSCs are adherent cells with a fibroblast-like phenotype with reservoir function as stem cells for adipocytes, osteoblasts and chondrocytes [96, 103, 104]. MSCs constitute up to 1% of the cellular content of the adipose tissue but can also be found in the bone marrow and other tissues. Upon stimulation by pro-inflammatory cytokines, MSCs secrete a variety of immunosuppressive molecules, thus decreasing overall inflammation [105, 106]. In addition, MSCs can promote wound healing and tissue regeneration by secretion of TGF-β and fibroblast growth factor, and MSCs are also able to differentiate into fibroblasts or endothelial cells for formation of granulation tissue [106-108]. Thus, MSCs combine anti-inflammatory and regenerative properties, and both of these properties would be of value for the treatment of fistulizing CD. MSCs do not express MHC II, and only low amounts of MHC I, and do not stimulate T cells, thus enabling escape from immune surveillance and low rejection after transplantation [104, 109].
MSCs have been successfully used for the treatment of active complex perianal fistula in CD patients. In a large study with 212 patients, 120 million adipocyte-derived MSCs were injected into the fistula tract and the primary end point of absence of fistula discharge, and lack of large fluid collection on MRI >2 cm was met in 50% of patients in the treatment group versus 34% with placebo [110]. A recent meta-analysis demonstrated an effect of MSC treatment with an OR for fistula persistence of 0.21 [111]. Overall, treatment of MSCs has found to be generally safe even though long-term data are still lacking. Malignant transformation of stem cells would be a potential concern since protumorigenic effects have been observed in mice [112, 113]. However, to the best of our knowledge, no cases have been reported in humans. MSCs have been approved for the treatment of fistulizing CD in various countries and provide an attractive treatment option for the subgroup of CD patients with treatment-refractory perianal fistula. In contrast, systemic use of MSCs for the treatment of luminal CD is less established, and future studies would be needed [96, 104].
Expert Opinion
Mesenchymal stem cell therapy is an innovative therapy for CD fistula with surprisingly high success rates in this very hard-to-treat patient population. While MSC therapy is currently established in large centers, costs, logistical challenges, and lack of long-term data so far limit wide-spread application.
Click to expand...

Background: Treatment of inflammatory bowel diseases (IBD) has tremendously improved during the last 20 years; however, a substantial fraction of patients does not respond to available therapies or lose response, and new strategies are needed. Summary: Two pharmacological principles have been...

www.karger.com
Last edited: Aug 7, 2020
You must log in or register to reply here.
Top