Hmmm I had a dr. point to this article. If you took it then went to work, you could be fired or they would think you really liked work.
K

Interesting theory. great material for jokes. But, since it also demonstrates that 'medical science' really is fumbling about in the dark in treating all of us, it perhaps is too 'dark' to make jokes about. think about it.. everyone of us who has been given immune suppressors MAY have been doing the absolute worst thing... all at the direction of 'doctors'.. (who are really just guessing). The quirky coincidence of this article is, if its right, then it explains why smoking is not good for folks with Crohns, even tho it slows or stops bleeding from the rectum. As for the Viagra, if it improves the blood flow, hence allowing a 'weak' immune system to better fight IBD, it could cause (as a by product) more bleeding in those with colon ulcers.
so, one might be getting better (so to speak) while your 'symptoms' look like you are getting worse. Make no mistake, this disease is riddled with mixed messages and crossed signals. no wonder there is no cure as yet.

This gives a little more credence to LDN which modulates or boosts certain aspects of the immune system.

I think they are over simplifying by saying a weak immune response. I think this is true to an extent but only to the initial immune response. The secondary response seems to be exaggerated because of the weak initial response.

I hardly ever get a bad cold or flu. If I get them at all, there is mild symptoms. My wife will be down and out with the same illness. So will most other people.

I have missed work once in the last ten years with the flu. My wife has missed work because of a high fever from a cold or flu several times in that same period of time. This seems to point to a weak initial response on my part, but in the end, it is eliminated by the secondary response.

To say my immune response is weak would be false by the symptomatic results of a cold or the flu. In the end it seems to work better than average.
The way it works is abnormal. This may even be a way to tell if someone has an auto immune disease by how there immune system responds to common ailments.

This would explain why the approach of weakening the immune system works to an extent. It weakens all of it, which would weaken the secondary immune response. But the real problem is the crappy initial immune response not the compensating secondary response.

This also would explain why stress causes use so much trouble. Stress weakens our initial immune response even more than normal. This causes a extra high secondary immune response to a system already in overdrive.

An analogy would be a prowler out in my yard looking to see if he can get in the house easily. If my initial response is to turn on the outside lights and lock the doors then it is likely nothing more will come of it.

If instead, I load my 308 and wait by the door I may be in for a gun battle. Sure, I may survive the break in, but it could likely result in quite a bit of damage in the process. The secondary response keeps me alive, but it would have been much better for me to have the correct initial response.

OK, enough speculation on that. I certainly could be wrong, but I think it is right enough.

"Honey, could you pick me up some Viagra for my Crohn's?" I don't know if I can pull that one off.

Hmmm very interesting theory. I was very healthy most of my life. Since about 2004 though I've gotten more ill then I think I have in the proceeding 10 years. I've had a slightly higher WBC for a few years now but my doctors have always dismissed it as nothing.

Being a user of Viagra. I could certainly "test" this theory by stopping my Pred and antibiotics and see what happens .. I'm sure that probably would be the best thing to do. Maybe after I am ramped down off the Pred I would be more willing to give it a shot.

I love in the article though the double entendre "we don't know if this could give rise to new treatments" :ylol2:
K

Well, Drew... I think that since it was the work of GI's, the double entendre was over their heads (think about that one for a while)..

You mean everyone's hand is not named "Honey"?

I better go to the Lounge.

Yeah, think perhaps I crossed the line a little there. Meantime, I'm hoping that my memory lapses will allow me to forget your comment before I go for a cup of 'decaf', complete with the required 'honey' I use as my only sweetener.

would it work for women with crohn's also?
K

A valid question. too valid for me to make a smart ass comment. I know nothing about the mechanics behind how Viagra works, but my memory seems to vaguely recall it being prescribed to women (simply because my 'juvenile' sense of humour found the notion funny at the time) for sexual dysfunction.

The odd thing about this whole Viagra issue is that my vague understanding of the drug is that it increased blood flow, enabling it to help men of certain age gain/retain erection... but it was that increased blood flow property at the center of possible adverse effects.. eye problems due to increases in the pressure within the eye (all of those little blood vessels that cause one red eye) or heart problems (again stemming from the change in blood flow).
Since one of my major issues was blood loss from the colon, increasing my blood flow would be the 'last' thing I would be inclined to try. Obviously, there must be more to the drug than my cloudy understanding recalls, or if it is increased blood flow at work, there must be method behind this (to my minds eye) apparent madness. Anyone care to show me where my thinking has gone askew? Always willing to learn new things, even at my advanced age.
A

I am agree with you viagra is very useful for the sexual dysfunction and it is now FDA approved do you know that the viagra is now used in heart disease. so this is wonderful medication..:rosette1::thumright:

I have a question I've always wondered about Viagra. Does it force you into an erection or just make it easier to get one? Like - would it just pop even if you were say, watching something really sad on tv, just because you took the pill?

Also - I read somewhere about a study to determine if Viagra can help women with sexual dysfunction. Never saw an update to that so I don't know what the outcome was.

I know the thread is old but I don't think it is necessary to create a new thread about this. I've got some via*ra and want to ask you. Does it help with Crohn's? 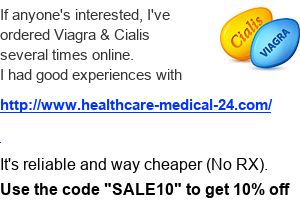