One of my sons (young adult) was diagnosed with Crohn's 10 months ago, so we're still early in the process of trying to find a treatment. At this point, his Crohn's is restricted to his colon - almost exclusively the lower third. However, his inflammation is severe. So far, we've tried Stelara along with Uceris and a burst of Prednisone. That didn't work, so next we're trying Entyvio. Of course I'm concerned that won't work either. I'm very worried about using immunomodulators, and I'm even worried about anti-TNFs, since there is lymphoma in the family. In any case, when I look at the statistics for how often the biologics bring on remission, they are discouraging. I'm wondering, how often is it that no effective treatment can be found?

Staff member
What dosing of Stelara was he on ?
90 mg every 4 weeks ?
Stelara is known to work far better in the small intestine and not as well in the large intestine
Entyvio is better for the large intestine but takes a very very long time(12 months average ) to be effective
Is there a reason remicade was not tried ?
That has a highly rate effective rate and only take 6-8 weeks .
Tagging @crohnsinct

my kiddo was dx at age 7 now 18 but currently on Stelara for the past 4:5 years
M

He was on Stelara every 8 weeks from April to August and then every four weeks after that.
We avoided Remicade because it has a black box warning about lymphoma, and his uncle had just died of lymphoma at a young age.
Also, my son needs the bathroom a fair amount, but otherwise he's doing well symptomatically. His energy and appetite are normal.Obviously we want to get rid of his inflammation.
But even Remicade, when I look at the statistics, doesn't look great to me.
I've heard very mixed reviews on how long it takes Entyvio to work - his IBD doc seems to think it's faster than people say and won't want him to hang on with it if it doesn't seem to have an effect after 3-4 months. I won't want to give up on it quickly because I don't like the alternatives at this point.

Staff member
Entyvio takes much longer than 3-4 months to work
The black box warning was from studies when immunosuppressants such as 6-mp or imuran were used prior to or in conjunction with biolgics such as remicade .
Later it was determined that 6-mp/imuran all by itself increases the risk of lymphoma so it’s no longer recommended
Gi use methotrexate instead
Unfortunately sorting out folks who only used remicade /humira and never had taken 6-mp/imuran was harder to do .
Keep in mind success statistics
To enter a trial for a new drug you already failed other drugs (poor responder ) and those in remicade trials way back when had tried everything else
Just like now Stelara/entyvio trials were on folks who already had failed immunosuppressants/remicade /humira /cimiza etc… before they entered the Stelara/entyvio trial

Introduction
Since the introduction of infliximab (IFX) in 1998 for use in the treatment of Crohn’s disease (CD), and subsequent approval for use in ulcerative colitis (UC) in 2006, anti-tumor necrosis factor-alpha inhibitor (ATA) therapy has become a key component of the treatment armamentarium for moderate to severe inflammatory bowel disease (IBD). However, there are concerns regarding potential complications related to ATA therapy, including malignancy. Cancers associated with ATA include solid organ malignancies, nonmelanoma skin cancers, melanoma, lymphoproliferative malignancies, and viral-associated lymphomas, such as Epstein-Barr Virus (EBV). Proposed mechanisms of tumorigenesis with ATA drugs include decreased activation of natural killer (NK) cells, promotion of apoptosis among macrophages and T cells, induction of cell cycle arrest of T cells, and inhibition of IL-1β production by monocytes.1–4

Historically, one of the first observational studies to note a potential link between ATA use and malignancy risk was in 2002. It described 26 cases of lymphoproliferative disease in a patient cohort receiving etanercept (18 cases) or IFX (8 cases) for either rheumatoid arthritis (RA) or IBD (5 cases).5 This association was appreciated about two and a half years after the drugs were licensed for clinical use in the United States. In that study, 81% of the 26 cases were non-Hodgkin’s lymphomas (NHL). Interestingly, most of the cases were detected within 8 weeks of initiation of ATA therapy. Three of the 26 patients had a history of lymphoproliferative disease prior to initiation of the ATA. Seventy-three percent of subjects had previous or concurrent immunomodulator medication (IMM) exposure, including methotrexate, azathioprine, and 6-mercaptopurine.

Multiple additional analyses have been published addressing the concern over a link between ATA therapy and lymphoma with inconsistent findings. However, many of the data supporting a link between ATA use and lymphoma development may have been confounded by a patient’s previous thiopurine (TP) exposure. Additionally, results may have been extrapolated from the rheumatoid arthritis literature which is a disease known for its inherent risk of B-cell lymphoma development.6 Some studies were limited by short term follow-up or underpowered sample sizes, leading to dissimilar findings amongst studies.7 Despite lack of discrete conclusions, the FDA has maintained a black box warning concerning lymphoma risk with ATA therapy.

Technical Review on the Use of Thiopurines, Methotrexate, and Anti–TNF-α Biologic Drugs for the Induction and Maintenance of Remission in Inflammatory Crohn’s Disease

in 2013.8 It included an evaluation of the current literature surrounding the risk of lymphoma in CD populations exposed to TP, methotrexate, ATA monotherapy, and ATA/TP combination therapy. Much of the analyzed data relating to lymphoma risk was from the TREAT™ Registry, CESAME, and Kaiser studies.9–11 These aforementioned studies, in sum, appeared to indicate a small but appreciable association between TP or combination therapy use and lymphoma development. The recommendations did not appreciate an increased risk of lymphoma with ATA monotherapy, although this was deemed to be of very low-quality evidence due to bias, imprecision, and limited follow-up data. With this in mind, the AGA recommended further studies to assess the risk of lymphoma relative to ATA monotherapy.

Since the first observational study among RA and IBD patients in 2002, the concern of an increased risk of lymphoma development with ATA monotherapy has persisted and has undergone further investigations.5 This qualitative review aims to evaluate and analyze the relevant literature addressing this quandary since publication of the AGA guidelines in 2013. Although this time span may seem arbitrary, it was chosen to allow a closer look at more recently published literature, which benefitted from longer follow-up times, larger sample sizes, and potentially fewer subjects with previous exposure to TP therapy, allowing for a more clear evaluation of ATA monotherapy and lymphoma development.

Although the main focus of this review is to assess ATA monotherapy exposure and the risk of lymphoma development in studies since 2013, additional focus will be given to addressing additional issues with IBD management in the biologic era such as the risk of hepatosplenic T-cell lymphoma (HSTCL), ATA use in patients with current or previous cancer, and implications for therapy in the discussion section.
Click to expand...

Risk of Lymphoma Associated with Anti-TNF Therapy in Patients with Inflammatory Bowel Disease: Implications for Therapy

Objectives: Patients with rheumatoid arthritis (RA) are at increased risk of lymphoma compared with the general population. There are concerns that tumour necrosis factor inhibitors (TNFi) may exacerbate this risk. However, since the excess risk of lymphoma in RA is related to the cumulative burden of inflammation, TNFi may conversely reduce the risk of lymphoma by decreasing the burden of inflammation. The aim of this study was to compare the risk of lymphoma in subjects with RA treated with TNFi with those treated with non-biological therapy. Methods: Subjects diagnosed by a rheumatologist with RA enrolled in the British Society for Rheumatology Rheumatoid Arthritis Register (BSRBR-RA), a prospective cohort study, were followed until first lymphoma, death or until 30 November 2013. Rates of lymphoma in the TNFi and non-biological-treated cohorts were compared using Cox regression. Results: 11 931 TNFi-treated patients were compared with 3367 biological-naive patients. 84 lymphomas (88 (95% CI 70 to 109) per 100 000 person-years) were reported in the TNFi cohort and 30 lymphomas (154 (95% CI 104 to 220)) in the biological-naive cohort. After adjusting for differences in baseline characteristics, there was no difference in the risk of lymphoma for the TNFi versus the biological-naive group: HR 1.00 (95% CI 0.56 to 1.80). No risk differences were observed for individual TNFi. Conclusions: In medium-term follow-up, there is no evidence that tumour necrosis factor inhibition influences the risk of lymphoma over the background risk in subjects with RA.
Click to expand... 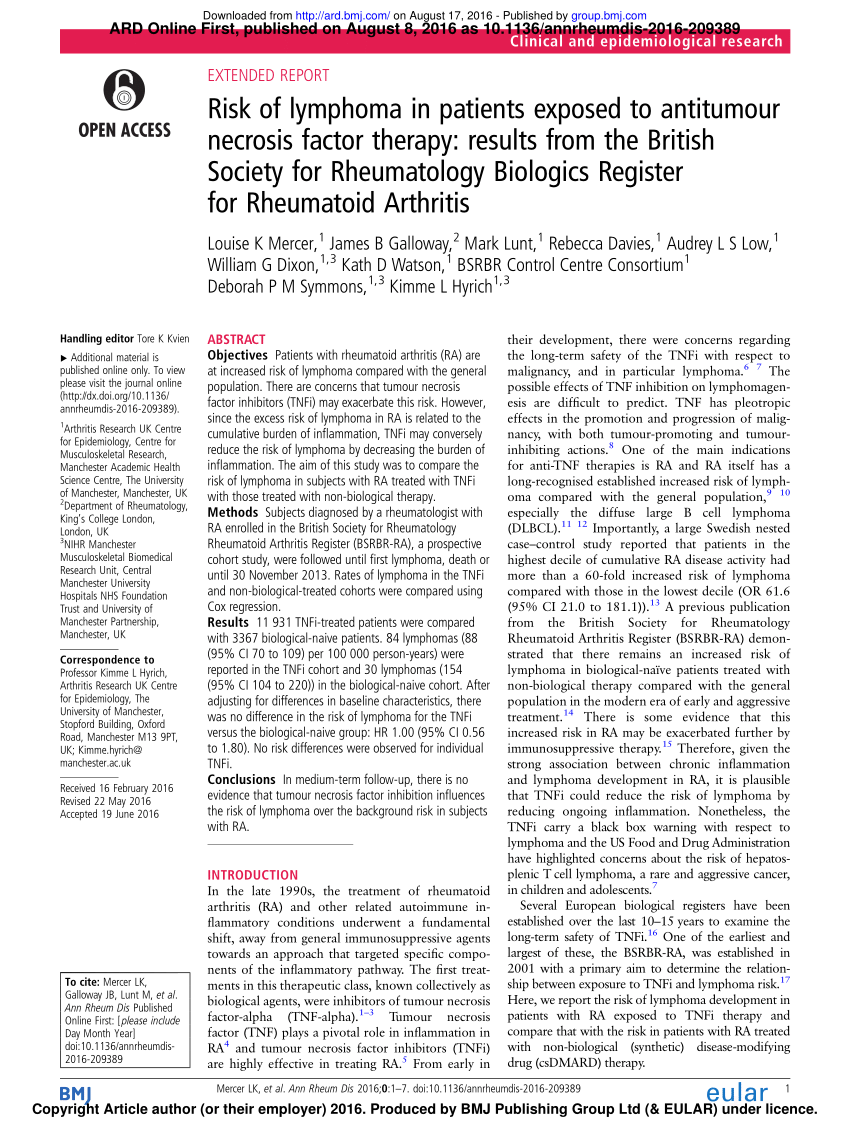 PDF | Objectives: Patients with rheumatoid arthritis (RA) are at increased risk of lymphoma compared with the general population. There are concerns... | Find, read and cite all the research you need on ResearchGate

Staff member
I chose RA because unlike crohns -rheumatologist use methotrexate and do not use 6-mp/imuran which muddies the waters .
There are also jak inhibitors which are in trials but those have black box for blood clots etc…
So not a bed of roses either .
My kiddo was dx at age 7 now 18
None of the meds seem good
At dx I was determined to just use een (formula only ) because no side effects
It takes about 2 years but you eventually realize
Uncontrolled inflammation is far worse in terms of cancer risks /qol etc than the small risk with meds .
It’s tough balance

good luck
You must log in or register to reply here.
Top